No pork without shoulder!

Pulled pork is made of pork butt. When you are done with laughter, be noted that in this case butt refers to a barrel. A barrel called butt was used for transporting pork cuts, like shoulder and ham during American revolutionary war. So, when cooking pulled pork, you should be working on pork shoulder.

This time my cut was 4 ½ lb (2kg). I took it from the fridge two hours before cooking and let it warm until inner temp reached 57°F (13°C). I cut off few hard lumps of fat and pieces of silverskin. Then seasoned it with BBQ Rub.

I usually try different rub recipes from the Internet but now I settled for commercial rub from the local store. Ingredients for the rub were smoked salt (23%), sugar, black pepper, paprika, onion, thyme, ginger and lemon. Seven (7) table spoons for this size of a cut is good amount. Rubbed it well all over

Again the pork butt was going to upper level of my Weber Smokey Mountain. Chamber was heated up to 194°F (90°C) from the other end of briquette snake. It took some 15 briquettes to get started and full 50 to run through 6hrs cooking time. About five (5) chunks of apple wood I placed on the front end of the snake. Remote thermometer is essential and I used again my iGrill2 with iPad app. Watching the temperature curve evolving is just hypnotic…

Before closing the lid, I sprayed the whole cut with apple juice. 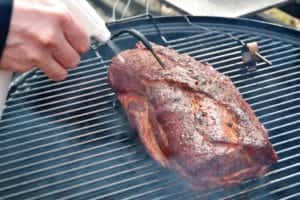 After four (4) hours, inner meat temp was 150°F (66°C) and I wrapped it in foil. Then, put back again. This maneuver helps to keep juices inside the meat.

Final stage before enjoying the pork was pulling it apart. This is always fun. You can witness results of your hard work by watching juicy, apple and smoky flavored meat dissolving into a small, tender bites. Aahhh, good times… 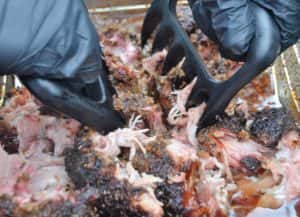 Dish variations for pulled pork are endless. Filling burgers or tacos with it are the most popular ones, but using your imagination, you can eat it with anything and anyone.