Moose roast smoked with apple wood, low and slow. You can’t go wrong with this BBQ. It is low in fat but with some patience, you will get juicy piece of meat and sweet taste of smoke.

Moose is the most important game in Finland. Hunting season starts in September – October, depending on the region and lasts some two months. 58.000 – 85.000 moose are hunt annually but the meat never end up in wide distribution. Almost all cuts are shared or sold directly by the hunters. So, you have to know right people to get nice piece of moose roast. I do and my freezer is loaded.

Cooking moose roast is not difficult. I have failed though, but not today. I was patient and prior to cooking, read some instructions. Highly recommended.
Low and slow is the way to go, so you need to plan ahead. Some chefs like to season it well, some chefs are more straightforward. Juniper berries, rosemary, black pepper and thyme are typical seasonings and some wild shamans even put beer on marinade. If you marinate, give it 24hrs in cool place. If you rub it, 1hr before is just ok.

I had never tried smoking venison before. I first decided only to rub the meat, but then figured smoking with apple wood might give nice flavor. Great choice. Moose meat’s natural flavor is quite mild and so is apple wood smoke. Fruitiness also seems to go well with game.

This time I had 2,4lb (1,1kg) cut which I took from the freezer to room temperature night before. When inner temperature of the roast was around 60°F (15°C), I rubbed it with black pepper and fine sea salt. Nothing else.

Sometimes I like to sear the roast before low and slow process, but today I did not. I don’t find it necessary if the meat temp is close to room temp before cooking and you let it rest well right after. It turned out well again so there you go.

I used Weber Smokey Mountain 22” for the low and slow process. First I heated it up to 230°F (110°C) and then laid the roast on upper grate. Once again I used snake method with Weber briquettes to get good stable cooking temperature for several hours. As the roast was smaller than usual, I made only half a circle snake on two layers and that was more than enough.

If you have read my earlier food stories, you should know by now that good thermometer is a must. I still have my iGrill2 with two probes. One for the meat and another for ambient. Outside temperature in early spring was nice and cool 40°F (5°C) and the roast was cooked exactly in two hours.
I took the roast out when inner temp reached 144°F (62°C). I wrapped it in foil and few towels and put aside for one hour to get good rest. Inner temp still increases 3 – 5°F (2 – 3°C) while resting so finally the roast was nice rose medium rare. Should you prefer well done, you can take the roast out at 150°F (66°C).

That’s it. Carve and serve!

Get familiar with Online Courses! 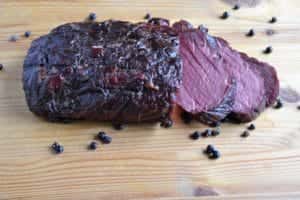