How to cook bear. Low and slow.

When I got firm grip of 7lb (3,2kg) bear chuck roast, I started to look for tips how to cook it. I was tempted in smoking it low and slow. Soon it became clear that there is not too much information available. At least comparing to thousands of beef and pork recipes. 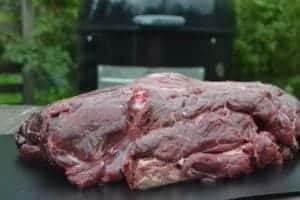 Most of the bear recipes I found, started with an apology or enticement. Meat was compared to pork or beef and advertised to be “as good as”. Warnings for trichinosis were given and various cooking temps for getting rid of it. I wonder why bear meat needs to be defended. It is rare and you need to know people to get a piece. When opportunity to buy a sizable cut appeared, I paid what was asked without argument.

Bear truly is rare to get in Finland. Brown bear population is less than 2000. Hunting season starts on 20th of August and lasts until end of October. Number of licenses is regulated. This year 255 licenses were granted. That was a record in long time. Majority of the bears are sold to restaurants and of course shared by the hunters. The butcher’s shop I walked in, had got two bears. They had been lucky and so was I.

As hunting is regulated, so is selling the bear meat. Certificate for trichinosis clearance and license to sell rare game need to be in place. According to Finnish Food Safety Authority, trichinella parasites die on 158°F (+70°C). Last witnessed trichinosis poisoning in Finland was in 1970’s. So if you have clearance and you cook it beyond 158°F, you are double safe.

Bears in Finland are all Brown Bears (Ursus arctos). Black Bear (Ursus americanus) is most common in America. I don’t know the differences yet, but I hope to get to grill Black Bear some day.

Today it is Brown.

I decided to cut my bear chuck roast in half. Just in case I would mess up the first try. Hey, how about that self-confidence? So, I was dealing with 3 ½ lb (1,6kg) cut.

The first thing to do was to trim all the hard lumps of fat and slice off any membrane. The fat was told to be bitter and not to dissolve very well. Then seasoning with black pepper, sea salt and rosemary all over. Next, back to fridge again. 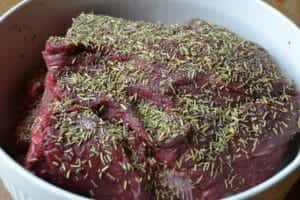 The second thing to do was preparing my Weber Smokey Mountain 22”. I was expecting some 4 – 6hrs cooking time so I set up my briquettes for the snake method. Then ignited 14 briquettes in small chimney starter. 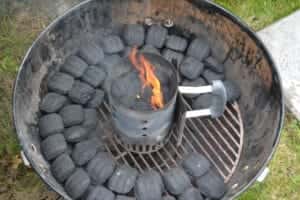 When these briquettes were ready, I placed them at the other end of the snake to get started. 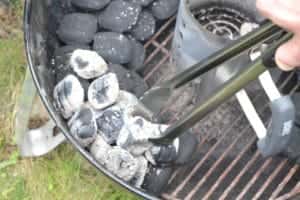 Filled up the water pan for better temperature control. 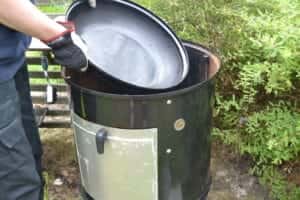 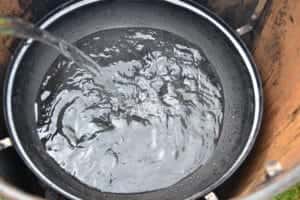 Preparations took about an hour and then my smoker was at 212°F (100°C), ready to welcome Mr.Brown. 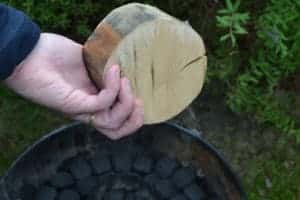 Once smoke started to generate, Mr.Brown got to sit in a foil pan on the upper grate. 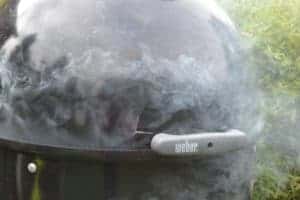 The first 2 ½ hrs was smoking the foil pan open… 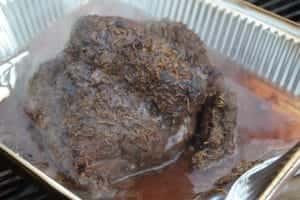 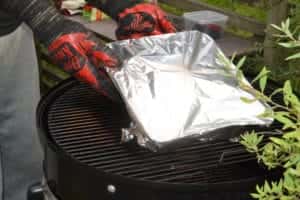 After 4 hrs I took Mr.Brown out and put to rest in a cooler box for 2hrs. 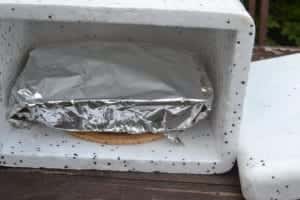 Dinner was served and excitement in the air. The first bite got me smiling. Success! 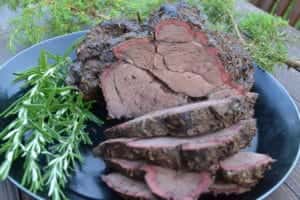 I was expecting very strong, gamey flavor but got happily surprised. Mild and mellow meat flavor, first smokey aroma and then rosemary. Meat was quite tender, but few hard lumps of fat I found inside the cut. Smaller ones were edible, but bigger ones I left aside.

I got oven cooked root vegetables and red wine sauce prepared for complementing the dinner. Spot on!

Bear is game. I think it should not be compared to pork or beef. If one wants to compare it to venison, I would say bear has more fat. It makes bear tenderer. You just have to trim it well.

I still have the other 3,5lb cut in a freezer. I will post about that experiment later.

Maybe I marinate it…

Get familiar with online courses!