I don’t cook venison too often. Moose I grill when it is moose season, but red deer I had never tried before. Red deer (Cervus elaphus) is one of the largest deer species and it does not live wild in Finland. There were attempts to breed it on late medieval and later on 1930’s, but without success. All red deer meat is imported.

My cut of venison was bone in rack of 11 ribs. Imported from New Zealand and sold frozen. Weighing 3,44lb (1,57kg) I figured it would be big enough to feed four people.

Venison is low fat, so you need to pay attention to cooking time. Target is medium rare which means 130°F (54°C) meat temp. If you overcook to more than 150°F (65°C), you will get grey, dry and chewy venison. So make sure you have good thermometer available.

I grilled my red deer by reverse sear method. This means placing the charcoals on the other half of the grate, while the other half remains empty. Meat is first placed on top of the empty side and cooked close to desired temperature. Then seared fast on the hot side. 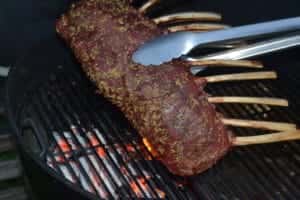 As the ribs were frozen and in a plastic bag, I put them in hot water for 15 minutes. That was enough for melting them. Then directly into the grill.

I lifted the ribs on top of the charcoals for fast searing and turned them only once. Charcoals were running very hot so searing was done in 2 minutes.

Then straight from the grill to the dinner table. I think searing and carry over of the inner temp took it somewhere to 140°F (60°C) which is not ideal but good enough.

Next time I will follow my own grilling instructions better.

Well, at least my family gave me thumbs up! 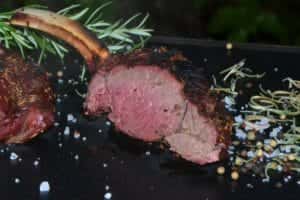