Round about 40 BBQ enthusiasts joined the Pitmaster School on May in Finland.

Weekend course at Pitmaster School was all about Kamado’s and my goal was to find out why.

Featured teachers this year were The Smoking Finns who are the first internationally recognized BBQ competition team in Finland. Two guys, who are also certified BBQ competition judges by Kansas City Barbeque Society. The organizer of the Pitmaster School, Chris Paton, is experienced in American style BBQ. He has held these courses since 2014 numerous times.

Pitmaster School started on Friday afternoon. After quick check in, we kicked off with chicken lessons. Exercises were done on chicken legs, using various rubs and learning competition grade trimming techniques. During the lessons I was 100% sure I would never do such a complicated tricks to a chicken at home. Only one week after I found myself doing exactly the same maneuvers to the chicken legs at home. Well, I had to show off to my family. 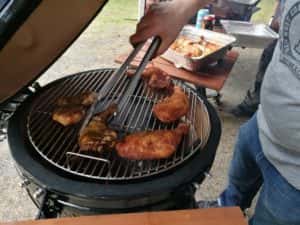 First evening at the school ended with preparations of Mangalitza pork, brisket and Boston Butt, which were left cooking overnight. Low and slow. 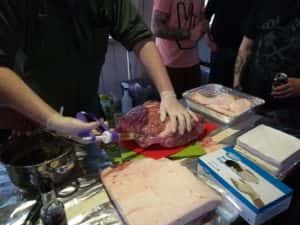 On Saturday we continued early in the morning by grilling bacon from the Mangalitza pork. It was served together with watermelon slices. Excellent combination! After bacon breakfast, followed some fish lessons and making of apple pie. Not so interesting for me as I was eagerly waiting for the large cuts. Well, I have to admit, the apple pie was damn good…

Later in the evening was finally a turn for brisket and Boston Butt. I was already familiar with both BBQ dishes but lesson for making of burnt ends was new. This is something I will definitely do at home also. Simple, fun and delicious. 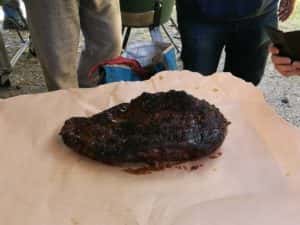 On Sunday we had only half a day and it was dedicated to ribs. Again, something I had cooked before but great closing for the Pitmaster School.

The best outcome from the weekend was continuous work around 14 Kamado grills and all the discussions I had with teachers and with my peers. I learned many tricks of Kamado grilling and its advantages especially in cold climates. Using lump charcoal was new experience for me and I am considering turning away from briquettes now. Chicken lessons, bacon cooking and preparing of burnt ends were alone worth of spending the weekend at school.

And on top of all great cooking, we got to relax in smoke sauna on both nights. Now that’s low and slow for you my friends! 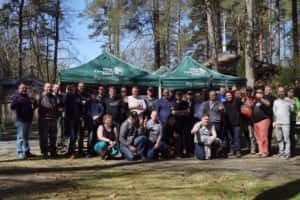