How to grill a Flap Steak?

Flap Steak is a thin cut of beef from the bottom sirloin area. Sometimes it is also called as Bottom Sirloin Butt and when in France, a Bavette. For the sake of clarity, a specification for the flap steak can be found from the United States Department of Agriculture, document Institutional Meat Purchase Specifications “Fresh Beef Series 100” version November 2014″ . A flap Steak is number 1185A.

I was lucky enough to find a well marbled 2,2lb (1kg) Australian Black Angus Flap Steak. Flavor and tenderness were written all over it. 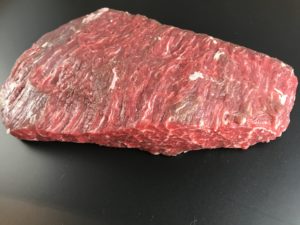 Flap Steak is cooked to medium rare doneness, thus 135°F (57°C). You can cook it simply on direct heat or by reverse sear technique. Regardless of your method, a thin Flap Steak cooks pretty fast so pay attention and use a fast reading thermometer.

I like to season my beef cuts simply with kosher salt and black pepper. You can also use a dry rub of your choice, but plain salt allows dry brining, which helps retaining the beef juicy when cooked. Just season the steak one or two hours before cooking and keep it in the fridge.

I heated my Weber kettle half full of charcoal up to 350°F (175°C) and placed the Flap Steak on the empty side. About 5min later, I flipped the steak over. Again, 5min later I moved the steak on top of the direct heat and let it get some color. Finally, 5min later I flipped it over once more and started to measure internal temperature. Once it hit 125°F (52°C), I took the steak out and put it to rest in foil. Temperature carried over to desired temp while resting, so after 15min it was ready to be served.

Carve against the grain and serve with chimichurri and roast potatotes!