How not to fail with grilled Christmas Ham.

Oven cooked ham is a traditional Finnish Christmas dish. On December 2011 I was told that Christmas Ham cannot be grilled, so I grilled it. My status raised to an arctic BBQ master level immediately.

While enjoying the praise of my magical skills over the past six years, I have not yet revealed the mistakes I have done. Believe me, when you cook something only once a year, you tend to forget and make the same mistakes all over again. This blog post is written as much for myself as it is for You.

So here comes the first recommendation you should take seriously. Before getting excited and rushing to the local butchers, read the freaking manual first! I have learned it hard way.

Take your defrosted ham from the fridge, and rinse it well under cold tap water and dry with a paper towel. That’s it.

Spend some time on this one. I have tried to rush this through in a hurry but guess what, briquettes don’t burn any faster and giving an evil eye won’t help. Igniting briquettes and letting the cooker heat up will take at least 90 minutes, especially on winter time.

I prefer the Snake Method as the bottom circle of Weber Smokey Mountain 22” allows easily 7 hrs of cooking time without refueling. You can go with Minion Method also. It’s all low and slow and temperature will remain around 250°F (120°C) 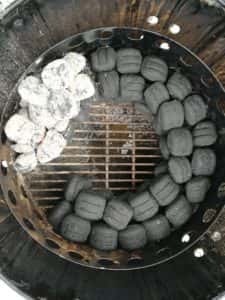 I loaded some 70 briquettes in a snake shape and 15 more to ignite them. 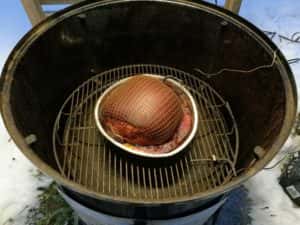 Cooking times vary a lot, depending on ham size, initial ham temperature, outdoor temperature and your preference on doneness. Some people like the ham being overcooked to 185°F (85°C), but some BBQ chefs like it better at 167°F (75°C). I prefer overcooked.

My 10lb (4,7kg) ham took exactly 9hrs to cook. After 7hrs of cooking, I added 20 briquettes to the snake as it was running short.

When the ham is done, remove pork rind and let the meat rest for 60 minutes wrapped in foil. In the meantime, mix together some mustard and honey. I prefer half and half. For the 10lb (4,7kg) ham, total of 3,5fl oz (1dl) is enough.

Glaze the ham with mustard and honey sauce and sprinkle breadcrumbs, or cornflakes crumbs for a gluten free option all over it. Now you need a hot oven for a few minutes only. Heat the oven up to 480°F (250°C) and cook until the glazing looks like gold. Keep an eye on it as it is very easy to BBQ the whole kitchen at the final stage.

Carve, enjoy and remember to brag about it!