Restaurant Day is a phenomenon kicked off by three Finns in 2011. The concept was simple. For one day, anyone can set up a restaurant and serve homemade food for everyone. Driving force for the whole concept was “…to have fun, share new food experiences and enjoy our common living environments together” as they state in their website.

Marketing is most often done through social media channels and word of mouth is another important way to reach audience. Over the years this food carnival has expanded to numerous countries and today stands as world’s largest food event. Nowadays it is held four times a year. So far more than 10.000 pop up restaurants have been opened for a day and close to two million people worldwide have participated. Today was my first time to visit a pop-up restaurant. Naturally my choice was a BBQ joint.

Markus Haapala is a BBQ and chili enthusiast from Finland. We belong to the same BBQ related Facebook group where I spotted his advertisement on Restaurant Day. We had never met before, but I suspected his BBQ skills being quite good. So I decided to experience the Restaurant Day concept and enjoy some great homemade BBQ also.

Markus is not a beginner on pop up restaurants. On the contrary, he has done this many times before. His restaurant was popped up in his home front yard where he also had a Rebel 75 offset smoker and Akorn steel kamado for cooking. Two tables with chairs were set on the lawn under the clear sunny sky. 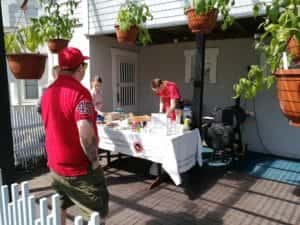 Menu consisted of Aberdeen Angus brisket, pork cheeks, coleslaw, marinated onions, BBQ beans and homemade smoked Rocoto chili sauce. I decided to go for brisket burger. The brisket had been smoked overnight in oakwood and mesquite and it was so tender. The chili sauce brought a gentle kick and all flavors were in right balance. Excellent! 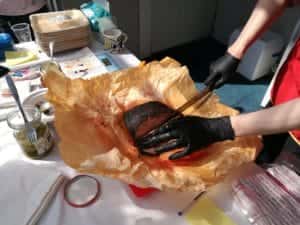 Cafe Capsicum pop up BBQ restaurant was 45 minutes’ drive from my home and well worth visiting. There were few other people already enjoying Markus’ cooking when I arrived and number of others lining up when I finally left his home. This restaurant day was building up nicely for Markus. I hope he had enough food to serve.

While driving back home I was thinking if I should pop up my own BBQ restaurant for a day. Well, maybe not any time soon, but for sure I will visit another joint whenever I spot an interesting one in Facebook.

What a great day!