Smoking Finns are two gentlemen, forming the first competition BBQ team in Finland. Riku Naskali and Juhani Hiltunen, who first met each other in 2013 when they were guest starring another team competing in Sweden. This competition was the first Nordic-one for Kansas City Barbecue Society (KCBS). After the event, they decided to join forces and establish a team of their own.

I had a chance to chat with Riku Naskali while they were competing in the UK in May 2018.

BBQ culture in Finland is on very early stages. The Smoking Finns are the only competition team to date, which makes them also the most active, the most successful and the most skilled in their sport. As there are no KCBS accredited competitions in Finland, Riku and Juhani have been competing elsewhere in Europe. Besides competing, both have also qualified themselves as KCBS judges.

Back in 2014 BBQ competitions in Europe were also new. Smoking Finns registered for their first competition in Germany and ranked pretty well for newcomers. Ever since they have been competing in more than 10 events and ranking has been increasing along with their skills. 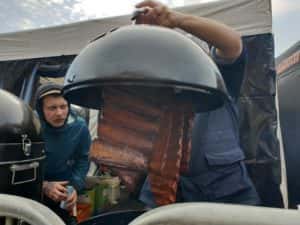 Riku explained that reason for joining the BBQ competition community has always been strong sense of belonging. Even when teams are competing, they are also becoming friends, and everyone is helping each other. It is more like brethren.

Following the success in past years, Smoking Finns have now been invited to their first American competitions. American Royal World Series of Barbecue 2018 will take place in mid September. This event in Kansas City introduces some 400 – 500 teams in four days. Next one will follow already in October. Jack Daniel’s World Championship Invitational Barbecue will be held in Lynchburg, Tennessee, with some 100 teams joining. Smoking Finns are set to go.

While competing in BBQ is great fun, travelling from Finland calls for some effort. Smoking Finns is not a professional team, but enthusiasm carries a long way. This year Riku and Juhani are stretching their resources and think they are reaching their limits. Five competitions abroad a year is quite much for a small team.

So what’s there for the Smoking Finns in future? Riku starts outlining the roadmap. First of all, spreading the word of real American BBQ continues. All the time. Secondly, Smoking Finns dreams of organizing a BBQ competition in Finland. Maybe first an unofficial one with an opportunity to train few judges at the same time. Next one might be a KCBS accredited competition. Riku thinks out loud that attractive competition should provide opportunities for teams to get invitations to American events. Getting an invitation is not easy but if you don’t try, you will never make it. Smoking Finns stands as living proof that anything is possible if you put your heart and soul to it. 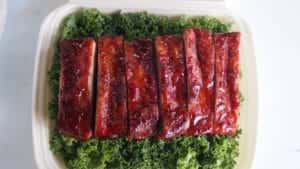 Real American competition BBQ in Finland is a curiosity. Smoking Finns are a pioneer and all great stories start somewhere. I trust Riku and Juhani will make their dream happen and the first competition in Finland will see the sunlight soon.

I’ll meet you all there.