It is ham season again. This time of the year I publish Christmas ham stories. Last year I wrote instructions on how not to fail with Christmas ham. Cooker was Weber Smokey Mountain 22” and I was burning briquettes. Now it is time to upgrade the recipe, cooker and method. All at the same time!

Ham is by far the most popular cut of meat in Finnish Christmas table. Turkey might hold the second place, but it is still in minority.

Today I was cooking with Monolith Kamado and using lump charcoal. I am also spinning the ham with Monolith rotisserie and smoking with apple wood. How exclusive is that!?

My ham was 6,6lb (3kg) cured and not frozen. I decided to leave it without further seasoning and let the smoke do its job. So, as straight forward as it gets. 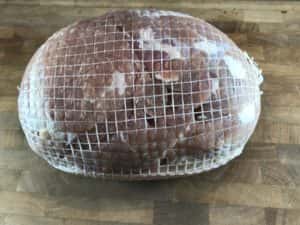 I heated my kamado up to 230°F (110°C) and placed the ham in the skewer. With rotisserie, I use direct heat. Big chunk of apple wood went into grill and on top of burning charcoals. 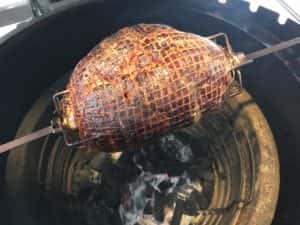 I anticipated some 5hrs of cooking time but faced some troubles right when I started. Even when I am not novice with rotisserie, I forgot that skewer holes let quite much air into grill. Internal temperature raised up to 356°F (180°C) almost immediately. I adjusted lower and upper vent almost closed and temperature started slowly to go down to desired level.

Still, ham was ready after 5hrs when internal meat temp was 167°F (75°C). Smoking time was first 3hrs and then 2hrs without smoke. I took the ham out and foiled it for rest about one hour.

End result was fantastic. Smokey and juicy. Maybe not the traditional way, but excellent experiment for sure.

Most Finnish chefs tend to glaze the ham also. I did not. Family enjoyed it as it was and screamed for more.

Yes, they really screamed for more!