Mesquite is strong, handle with care!

I have grilled ham numerous times (check here or here). Especially on Christmas time. Ham tends to be the first choice for Christmas dinner in Finland, but rarely it is smoked.

Reason for this food story is a bag of mesquite wood chips I got as a gift. Mesquite I had not tried before, and quick research revealed it to be very strong flavored smoking wood. I was hesitating on trying that for pork, but then decided to give it a go. Carefully, was the plan.

I had 7,7lb (3,5kg) ham waiting in the fridge and outside temperature was 53°F (-12°C). Perfect day for smoking some meat. Ham was already brined at the butchers’ shop and packed in a net. Plug-and-play! 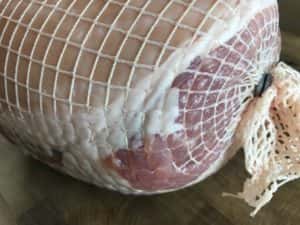 I was using my Monolith Kamado grill with lump charcoal again. I heated the grill up to 230°F (110°C) and prepared for indirect, low-and-slow cooking.

Ham temperature was 32°F (0°C) when I started cooking. As the plan was to smoke with care, I added only one handful of mesquite chips on top of burning charcoals.

First batch of chips burned within one hour, so I added another handful. After two hours, wood was burned, and I decided to leave the ham cook without further smoking.

I know some pitmasters prefer their ham cooked to 158°F (70°C) and I have done that also. Nevertheless, this run was excellent and ham was everything but dry. Mesquite smoke gave it a nice flavor. Smoky, but not bitter smoky like it sometimes can get.

Strong recommendations, as long as you handle with care!